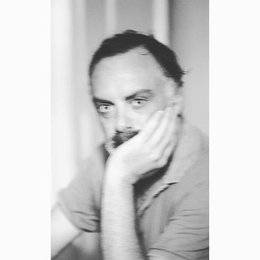 He studied Philosophy and Art in Bologna.

He has always been interested in art, the medium of film, and the world of the fantastical and oneiric in literature, film and music.

As an adolescent in Sicily, he began expressing himself through small experimental videos in which the power and evocative nature of the images and sound take precedence over classical narrative.

From 1996 to 2000, he lived in Berlin, where he wrote and directed several short films.

He subsequently moved to Rome, dedicating himself to documentary filmmaking and working as a cameraman.

He began painting virtually using computer programs before moving on to real paint. Using mostly acrylics and oils mixed with other media, his work is an expressionism of sorts that shifts between the human figure and abstraction.

Some  of his paintings are in private collections in New York, Paris and Berlin.

He currently lives in Berlin.